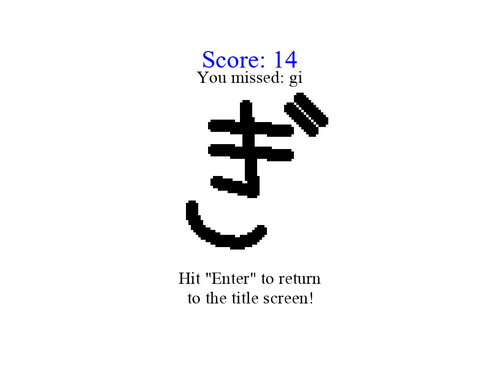 In this major update to Nihongo, a couple of features were added that I hope will greatly improve the gameplay and learning experience that I hope this game provides, as well as some minor tweaks to some of the characters. Both of the added features were made as per a very helpful suggestion from user "LazyLazer" that they brought up in a comment on the game, and are as follows:

1. A Game Over screen has been added (shown) that displays your score, the spelling of the character you missed, and the character itself. You are immediately directed to this screen when you miss a character, and from there you can go back to the Title screen.

A typing game meant to help someone learning the Japanese alphabets of Hiragana and Katakana.